2. Major issues for the National Park

2. Major issues for the National Park

The New Forest faces a period of significant change as the country recovers from the Covid pandemic, confronts the twin challenges of the climate and nature emergencies and adapts to life outside the European Union.

New and emerging domestic legislation and reforms are likely to have a profound and lasting impact on how the National Park is managed in the future, although the future direction of national policy and funding is still to be determined at the time of preparing this Plan. So whilst this Plan sets out our shared vision, priorities and objectives for the next five years, a more detailed set of actions and targets to guide our collective work over the next two years has been produced. Thereafter, we will review and publish a revised annual work programme for years three, four and five. 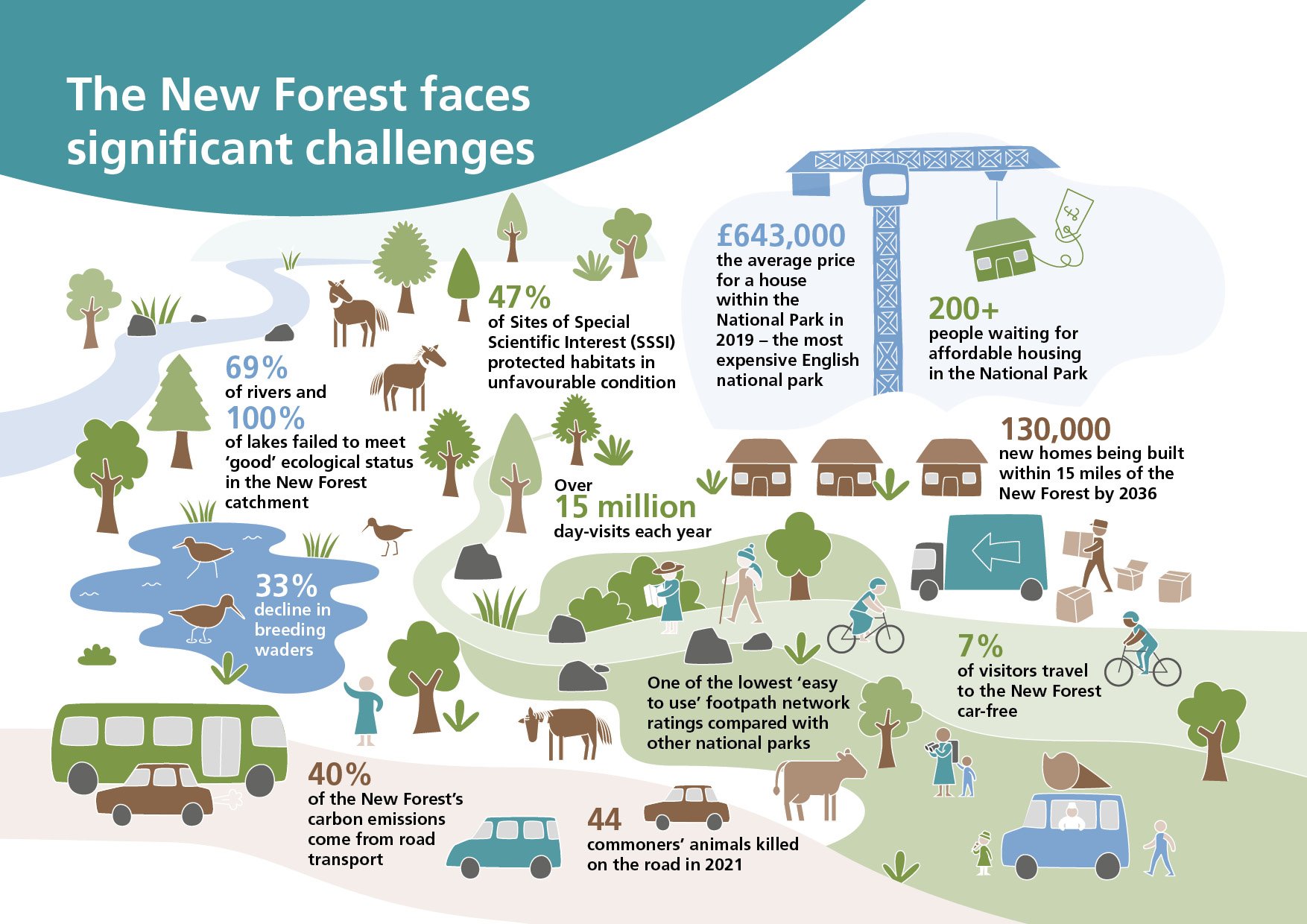 In 2019 the UK became the first national government to declare an environment and climate emergency. That decision marked a renewed sense of urgency in tackling climate change with the Government legally committed to achieving net zero emissions by 2050. The Government has recognised the key role of protected landscapes in addressing the climate and nature emergency.

More than two-fifths of UK species including animals, birds and butterflies have seen significant declines in recent decades. The State of Nature report (2019), which draws on scientific monitoring since the 1970s, showed that there has been no let-up in net losses for the UK’s wildlife. More intensive agriculture is still driving declines in farmland nature, while climate change is also having an increasing effect, with average UK temperatures rising by 1C since the 1980s. The state of wildlife in the New Forest remains a major concern, with just over 50% of our Sites of Special Scientific Interest (SSSIs) judged to be in ‘favourable condition’.

A challenging issue for nature conservation and recovery in the New Forest is how to respond to increasing demand for access without compromising the integrity of protected wildlife sites.

Before the pandemic, it was estimated that there were over 15 million day-visits for leisure and recreation each year to the National Park. 75% of these visits arose from just 300,000 relatively local people travelling from home on a regular, often daily basis. The remainder of the visits were by just over one million people who were on holiday. These large numbers and the fact that well over 50% of the National Park is designated for its rich wildlife create a unique management challenge.

In 2019, an extensive consultation known as ‘Future Forest’ debated and sought views on recreation in the New Forest National Park and surrounding area. Through this work partners have already agreed a comprehensive series of actions to manage recreation across the New Forest and beyond. Several of the most fundamental actions have been incorporated into this Partnership Plan.

In addition, several local planning authorities in and around the New Forest have adopted planning policies and associated mitigation schemes in place to ensure the recreational impacts arising from new development do not impact on the integrity of the New Forest’s internationally protected habitats.

Linked to this, one of the Partnership Plan actions is to move towards a more coordinated, strategic approach to mitigate the recreational impacts of the significant levels of new housing proposed in the areas surrounding the National Park. Up and until now, this has largely happened independently in local authorities around the New Forest, but the benefits of a more coordinated, strategic approach are recognised.

For the foreseeable future, there is likely to be an increased demand for ‘staycation’ holidays and further recreational demands placed on the National Park. A joint ‘care for the Forest, care for each other’ action plan was put in place for 2021 (and will be repeated in 2022) but we recognise that we need to take forward the longer-term actions that have already been agreed to manage these increasing recreational pressures. This is likely to entail a fundamental review of an increasingly outdated and fragmented infrastructure that includes campsites, car parks and the waymarked off road cycle routes.

There is also a need to secure opportunities for significant new nature-rich green spaces for recreation close to where people live, to both take pressure away from the protected habitats of the New Forest and to create healthy communities for the future, such as exploring the feasibility of a new country park to benefit the growing resident populations on the Waterside.

Transport is absolutely fundamental to the sustainable future of the New Forest – how we move affects how we live, work and interact; how we experience places; how our businesses operate; and our health and wellbeing.

The New Forest is one of the most visited national parks in England and traffic within the National Park is a major issue for many residents and visitors.

The New Forest also has some of the highest car ownership in the country and the vast majority of visitors travel to the area by car. With a limited range of alternative transport options, an ageing population and lack of connectivity, the opportunities for active travel for some journey types are more limited. There is evidence to show that whilst there was a reduction in traffic in Hampshire during the pandemic lockdowns, traffic levels quickly bounced back to more typical ‘pre-Covid’ levels.

High levels of car dependency can affect the quality of life of local communities, the quiet enjoyment of the National Park, the welfare of livestock and the integrity of the Forest’s landscape and habitats. It is also a significant local contributor to climate change and air quality, with roads and road transport generating the highest emissions in the National Park. Other matters of concern include the volume of traffic generally, verge parking, animal accidents, maintenance of minor roads, congestion in the larger villages (particularly Lyndhurst), failure to observe speed limits, lack of sustainable transport alternatives and commercial lorries’/vans’ use of minor Forest roads. Reducing CO2 emissions from transport is a major priority.

The Government’s Decarbonising Transport Strategy (2021) sets out the commitments to fully decarbonise transport by 2050, including greater promotion of cycling and walking. Both Hampshire County Council and Wiltshire Council are preparing new Local Transport Plans with a focus on sustainable transport and reducing dependency on the private car.

The New Forest is celebrated as a living, working landscape where sustainable farming and land management systems deliver many benefits to society – increasingly known as ‘public goods’. The unique and ancient system of common grazing is a critical component of ensuring the Forest survives as an extensive, intact cultural landscape.

This new Plan coincides with the start of a period of ‘agricultural transition’ following the UK’s departure from the EU. Funds will be diverted from Direct Payments to farmers into a new Environmental Land Management Scheme (ELMS) from 2024. This will replace the Higher Level Stewardship scheme that over 12 years has provided more than £22 million to help restore and enhance the internationally-important habitats of the New Forest. Partners on this scheme are now working together to understand what is needed to deliver public goods into the future. From 2021-24, a Farming in Protected Landscapes programme will support farmers and land managers in the National Park to deliver environmental outcomes and contribute to Government priorities for nature, climate, people and place.

The high proportion of larger properties, and the associated high price of housing, make it particularly
hard for young people and young families to secure low-cost housing that would enable them to continue living in the area.

There is some early evidence to suggest that the pandemic has accelerated people moving from high density urban areas to the countryside, which together with more people choosing to work from home, is likely to increase pricing pressures on the National Park’s limited housing stock.

The English national parks were created in part to provide a healing space, both mentally and physically, in the aftermath of the Second World War. The pandemic has similarly raised many fundamental questions about the way we can sustain healthy lives in harmony with our environment.

There is a greater appreciation of our natural environment and the benefits of having accessible green space on our doorstep. Just as in the 1940s, national parks are well placed to be inclusive and accessible places that support the nation’s health and wellbeing and to lead the way on sustainable tourism and opportunities for people to volunteer and engage in community projects for the benefit of
all.

Government is responding to calls for these opportunities to be improved and more open to all by supporting a renewed focus in protected landscapes to reach and welcome people and remove barriers to access to national parks for all parts of society.

There is a huge and diverse range of organisations, charities, groups and fora working in and for the New Forest, with healthy levels of public engagement and participation. There are some excellent examples of partnership working but equally there are many areas where organisations and communities could work better together and pool resources to achieve more and in doing so strengthen understanding of the New Forest beyond our boundaries, presenting a more unified, powerful voice to national and regional policy and decision makers.

At the time of writing, the Government is consulting on how partner organisations can work together more effectively in protected landscapes. It is also widely recognised that strengthened management plans would secure greater ambition for our special landscapes and to better reflect all parts of society.

This Plan takes account of the proposed direction in the Government consultation and is written in anticipation of a strengthened role for management plans and requirement for public bodies to work more collaboratively going forward. 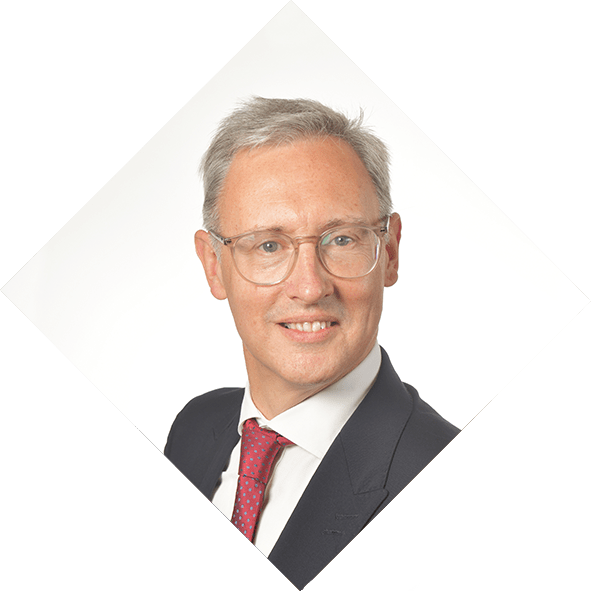 'The Partnership Plan sets out our priorities and how we will work with others to deliver it.'