A multimillion-pound scheme for the New Forest has drawn to a close, leaving a legacy of connected communities and thriving wildlife.

The Our Past, Our Future (OPOF) Landscape Partnership Scheme undertook 21 projects to restore lost habitats, develop skills and inspire a new generation to champion and care for the New Forest.

Led by the New Forest National Park Authority (NPA) in partnership with 10 other organisations, the £4.4 million scheme was launched in 2015 and focused on the enclosed lands which surround the Open Forest.

One of the biggest successes of OPOF has been the time and effort its incredible volunteers have contributed. Around 2,000 people have volunteered for the scheme, giving 77,000 hours of their time on a range of opportunities, including archaeological surveys and research, historic routes research, events, practical conservation tasks, water quality monitoring and biological surveys.

Patrick Heneghan, New Forest National Park Authority member and Our Past, Our Future Chairman, said: ‘Since early 2019, I have had the immensely rewarding experience of being involved with the fantastic work the Our Past, Our Future scheme has been delivering. Right from the start I have been struck by the huge importance and value to the New Forest of the 21 projects being undertaken.

‘As well as the incredible scope of work, particularly impressive has been the commitment and common sense of purpose demonstrated by a diverse range of partners.

‘I would like to take this opportunity to pass on my appreciation to all those organisations that have provided funding, to those partners who have led the various projects and, very importantly, to all the local community volunteers who have turned out in such numbers to do so much of the physical work needed to make the projects successful.’

Rachael Gallagher, Our Past, Our Future Delivery Manager at the NPA, said: ‘The OPOF scheme has been a fantastic opportunity for communities, organisations, stakeholders, landowners and volunteers to work together to help protect the heritage of the New Forest for the future.’

Thanks to the hard work of all those involved, OPOF has also achieved most of its targets and aspirations. It has also been hailed an outstanding example of successful partnership working in the New Forest. An external evaluation found it created a ‘step change’ through a new, collaborative culture, with the partnership at its core.

The partners involved in OPOF were:

Learn all about the scheme and what was achieved: 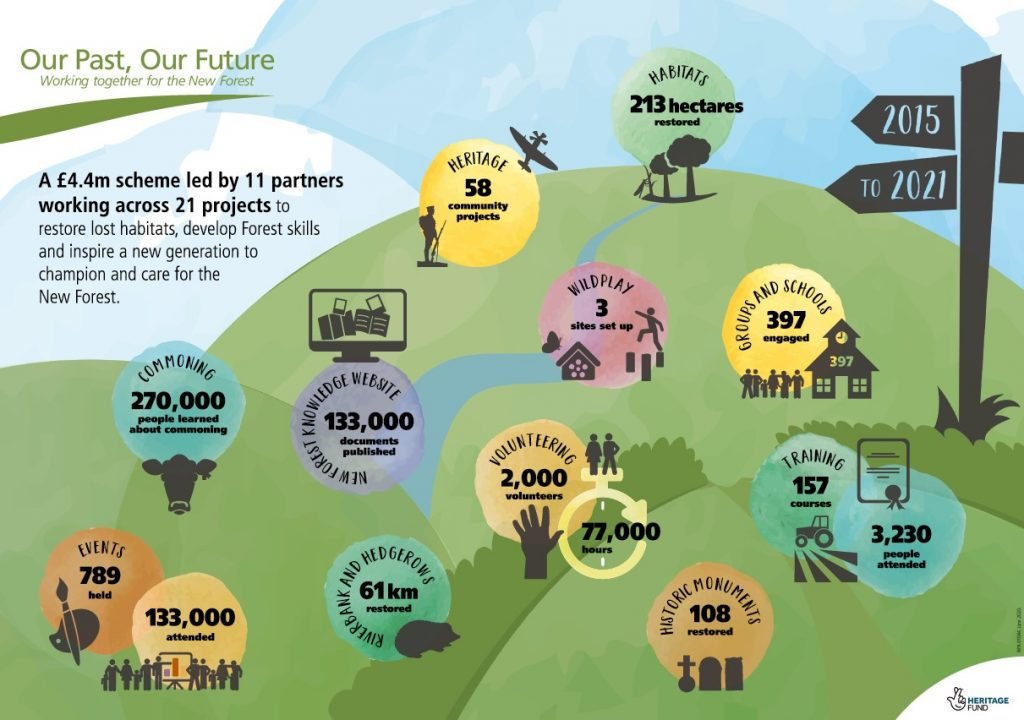 A £4.4million landscape partnership scheme for the New Forest supported by the Heritage Lottery Fund.

Landscape partnership projectsOur Past, Our Future ended in March 2021. Here you...
News and updatesA multimillion-pound scheme for the New Forest has drawn to...
Scheme managementSupported by a National Lottery Heritage Fund grant, Our Past,...
VolunteeringWe are always looking for dedicated and passionate volunteers to...