This walk is one of five Historic Routes. Download the map and leaflet to discover the historic points of interest.

This trail starts at Hanger Farm Arts Centre, a restored Grade II listed timber framed barn, and heads up and around the Iron Age hillfort of Tatchbury Mount. Walk along some of our oldest routes, now covered with a canopy of trees, and in the spring, areas are carpeted with bluebells and other wildflowers. Any road noise soon drifts away as you seem to journey back in time. Please note, this route may be extremely muddy in parts and we recommend wellies or other suitable footwear. 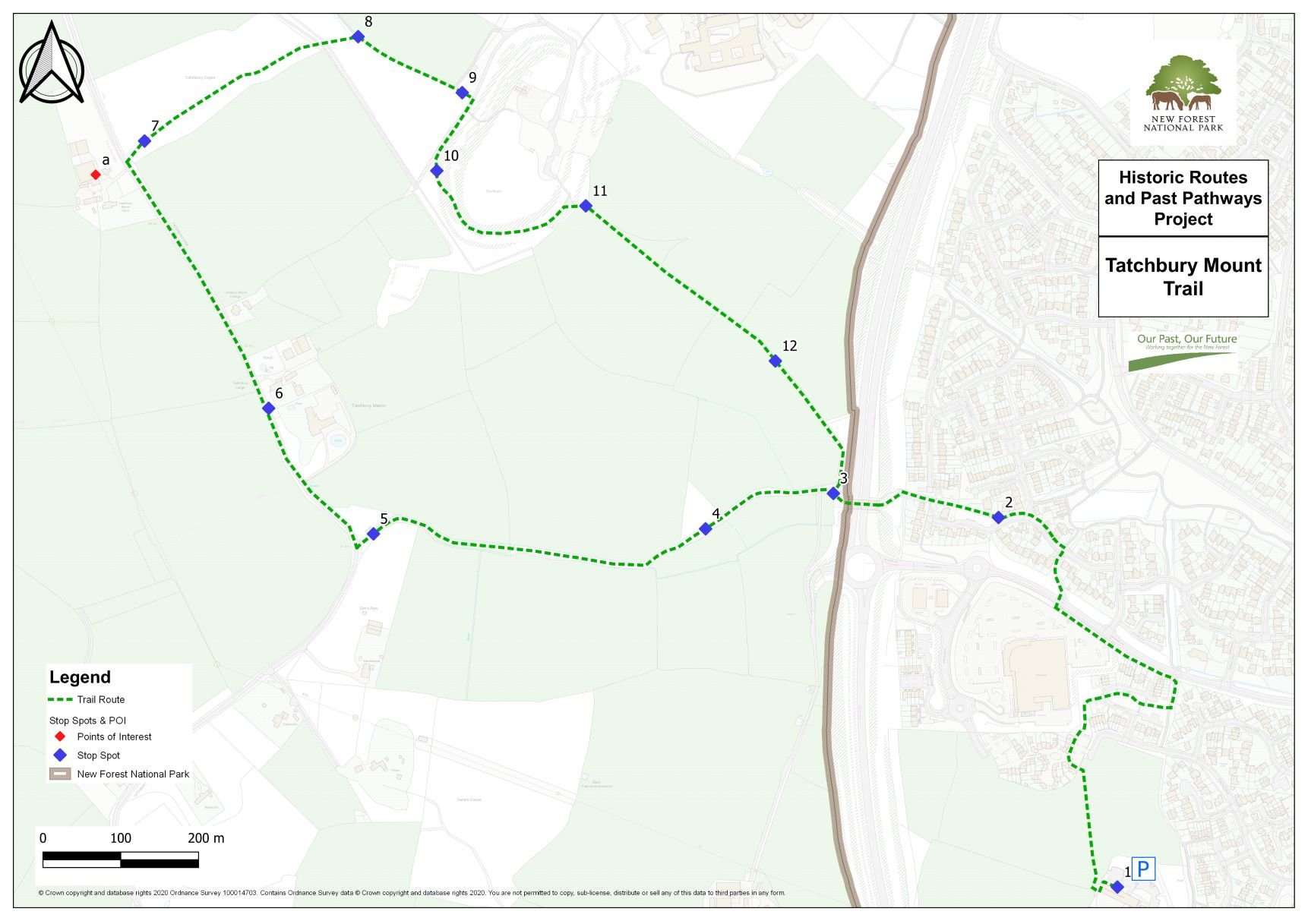 Hanger Farm was first recorded in Saxon times, implying the site was already established well before the Norman Conquest of 1066 and therefore has been continually occupied and farmed for over 900 years.

Hanger was later listed as a settlement in the Domesday Book (AD1086). This survey was ordered by William the Conqueror as a taxation record to ensure taxes were being paid. The Domesday survey only recorded the head of each family, but it’s possible that the area of Hanger (around 120 acres) had a population of about 35 people. Over the centuries the spelling of Hanger has changed with the area also being known as Hangre, Hangere and Hangra, which in old English (Anglo Saxon) means wooded slope.

The area eventually became farmland. A 1927 sales document records a 187-acre dairy farm tenanted by Mr J. Mansergh and it remained in use as a farm until the 1950s. In 1901, the tragic death of farmworker William Phillips and the subsequent theft of funds raised to support his widow Caroline and 10 children, sent shockwaves through the local community.

Below, you can listen to a dramatisation of the story.

In 2005, Totton and Eling Town Council renovated the 17th century timber-framed barn and created the Hanger Farm Arts Centre. If you’d like to learn more about Hanger Farm, pop in on your walk.

Hazel Farm was one of three dairy farms on the Tatchbury Mount estate, recorded in a 1927 sales document as 102 acres and tenanted by Mr L. Merchant. The farm complex, once known as Tatchbury Farm, dates from the 19th century. The site became a conservation area in 1986 prior to development and the building of the surrounding housing estate. It was recorded as being a good example of a compact farm layout and was noted for its farmhouse of Flemish bond with purple header bricks.

When the Totton Bypass was built in 1991, Hazel Farm was still in use, requiring the construction of a large underpass capable of allowing farm machinery to pass through. From this point on the trail, you are in the New Forest National Park and the route gradually transforms back to something closer to its original ancient trackway, with its own seasonal beauty and charm.

This section of the trail passes by a small copse on its northern side and is the most intact section of this ancient trackway. Banks and ditches are clearly visible on both sides with the main open way in-between. If you cast your mind back, you can imagine this may have once been a busy lane with horse or cow-drawn carts traveling along it, taking produce to marked or fodder to livestock out in the fields and forest. People would walk to their daily jobs or home after a tiring day or livestock such as cows, sheep or pigs would be moved from farm to pasture and home again.

During spring, this section of the trail is lined with bluebells and other seasonal native flowers; a real indicator of its ancient past.

The modern Tatchbury Manor House is the possible site of a medieval settlement. Over the centuries, Tatchbury village has been recorded as Tachburi, Taceberie, Teocreberie, Tacheberia and Tachebury. It was first recorded in 903 when some land at Tatchbury was given to the abbey of Hyde on its foundation by Edward the Elder. By 1475 Tatchbury village disappears from all records and to date there has been no physical evidence to help locate the exact location of the village.

It is likely that a high-status house, in one form or another, has stood here for hundreds of years since the establishment of the now lost Tatchbury village. There is some evidence that the present Tatchbury Manor House originates from the 17th century with a major part from the mid-nineteenth century and there are 20th century additions. There is a small chance that the current structure may incorporate part of the older 13th century manor house possibly one of King John’s hunting lodges.

Tatchbury Copse is a calm and tranquil part of this historic route and in spring the woodland floor is carpeted with bluebells.

The Tatchbury Mount estate once contained cultivated gardens and a walled garden.

Try to spot a concrete pad, which may be the remains of a heated glasshouse used to grow plants and fruits, and a small brick building built into the lower bank of the hillfort, which was the boiler room.

The banks here are what remain of the Iron Age (800BC to AD43) hillfort known as Tatchbury Mount hillfort. Apart from the public rights of way, the rest of the hillfort is on private land.  The hillfort sits on Tatchbury Mount, a prominent clay hill on the north eastern edge of the New Forest, with impressive views all around. The hillfort defences originally enclosed the hilltop, forming an oval shaped interior about the size of two and a half football pitches.

The entire site was landscaped in the 18th century when the manor house and gardens were built. There are differing opinions as to the use or purpose of Iron Age hillforts and due to lack of evidence, we may never be able to say exactly what Tatchbury Mount hillfort was used for.

These artist impressions show you have the hillfort may have appeared over a thousand years ago. They were created in collaboration with Rich Potter at the Department of Historical Studies, University of Gothenburg.

At this point we can start to appreciate why the hillfort is located here; there is a clear view across Totton and the Lower Test Marshes to Southampton Docks more than four miles away, and beyond.

In the late 18th and early 19th century, a country house, Tatchbury Mount, was constructed within the central enclosure and the surrounding area was extensively landscaped and planted with trees as part of the formal gardens.

The NHS took over the site in 1951 and in the late 1960s the farmland was sold and in 2006 the mansion house within the hillfort was demolished.

As you walk down the hill heading back towards the underpass take a moment by the large oak tree, beside the path, to cast your mind back 1,500 years to AD508. This point in time falls within a period commonly referred to as the Dark Ages. It is said somewhere in this location, a huge battle took place and a British king called Natanleod was killed. The name of this king became the name for the area, Netley Marsh.

Below, you can listen to a dramatisation of the battle.

Tatchbury Manor Farm has been farmed by the Hunt family for over 100 years. The family produce their own pork from their herd of free-range pigs and are members of the New Forest Marque.

In years gone by, the farm was home to a milking herd and also grew all the fodder needed. Grain would be taken to Eling Tide Mill by horse and cart for milling, a job that could take up to a day according to the tides and milling times. There are still signs of the old farm including the granary, the old barn and a disused well. The old milking parlour is now the farm shop. 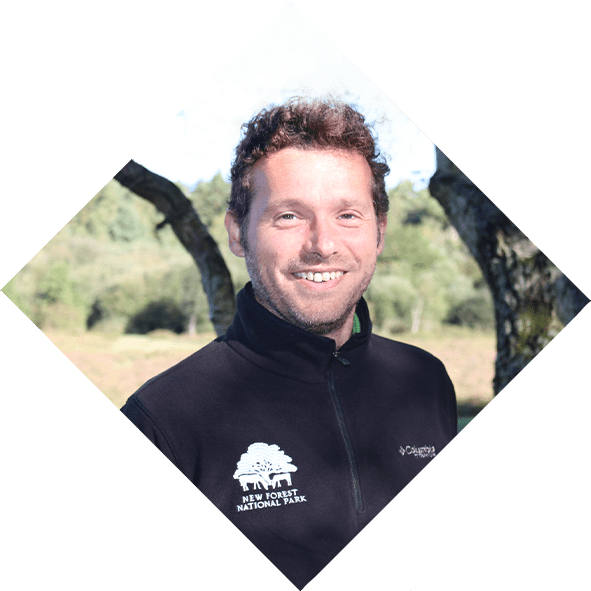 Historic routesThe historic walking routes can now be found on our...
Historic stories and songsSharing stories of past events, exploring myths, legends and folklore are all...
Houses and gardensHouses and Gardens Visit the countryside museum and Elizabethan manor...
Museums and art galleriesMuseums and galleries Spend an action-packed day at Beaulieu featuring the National...