The New Forest National Park Authority is calling on retailers across the Forest to remove disposable barbecues from sale and for a continued ban on fires and barbecues in the open countryside of the National Park.

The move follows large numbers of disposable barbecues being used while the New Forest is at extreme risk of fire. Multiple fires have had to be put out in recent weeks and numerous areas of scorched earth have been left across the protected habitats when a fire warning is still in place.

Forest organisations including the National Park Authority, Forestry England, Hampshire County Council, New Forest District Council and the National Trust have been working tirelessly with the emergency services to educate the public about the dangers of disposable barbecues and fires, and to protect the Forest and coast.

Brockenhurst business Streets Ironmongers store has already voluntarily pulled disposable BBQs from sale and Brockenhurst Business Association has asked other retailers in the village to join them. See the list of retailers supporting the BBQ ban so far.

New Forest National Park Authority Chairman Oliver Crosthwaite-Eyre said: ‘The National Park is one of the best places for wildlife in the UK and is extremely fragile.

‘In nearby Dorset we have seen over 220 hectares of rare heathland and forest at Wareham Forest devastated by fire, likely to have been caused by disposable barbecues, and the same could happen here. It has been really upsetting to see the photos of dead lizards, slow worms burnt alive and all the trees and heathland destroyed. There is also a huge concern here that New Forest ponies and cattle could be put at risk.

‘We congratulate Brockenhurst businesses for taking the lead and we’re calling on all retailers to do the right thing and remove them from sale and for all landowners to keep sending out clear messages; fires and barbecues are totally inappropriate at any time in a protected National Park.

‘With the impacts of climate change, we expect to see more dry, hot weather so it’s even more important that we see these changes now and for the future of the National Park.’

Retailers who are backing the ban are asked to show their support on social media by tagging #BBQFreeNewForest and to display a poster.

Streets Ironmongers owner and Brockenhurst Business Association Treasurer Alan Bartlett said: ‘We made our decision to withdraw them from sale after seeing how dry the Forest was and the damage the instant BBQs do to the grass and how that can easily turn into a major fire like we have seen at Wareham. Also living here above the shop and seeing the fire engine go out two or three times a day shows how bad it is.’

The New Forest Marque local produce scheme is also contacting its members asking them to remove any disposable BBQs from sale.

Bruce Rothnie, New Forest Deputy Surveyor for Forestry England, said: ‘Forestry England has repeated warnings to the public about the high risk of wildfires and confirmed that fires of any type, including disposable BBQs are not permitted on the land we manage at this time. We’ve also closed all of our BBQ facilities at popular visitor spots in the New Forest.

‘It’s shocking that a small, but dangerous, minority are ignoring the warnings and our staff have reported a steady increase in the number of people using BBQs or lighting campfires. In the New Forest alone, over one weekend, our team of rangers and Keepers spoke to hundreds of people and extinguished over 60 BBQs and campfires.’

Hampshire Fire and Rescue Service Station Manager Andy Weeks said: ‘We urge the public to follow the guidance and refrain from using barbecues and having camp fires in forests, parks or any public area due to the risk of wildfires at this time.

‘It’s vital for everybody to stay alert and report any incidents as soon as possible. If you see a fire, get to a place of safety and call 999 immediately so we can put it out before it does any significant damage.

‘We will continue to work with our partners to raise awareness of this serious threat, to protect our community, precious nature sites and wildlife.’

Pictured above (left to right): Forestry England Ranger Richard Daponte, owner of Streets Ironmongers Alison and Alan Bartlett, and NFNPA Chairman Oliver Crosthwaite-Eyre call for other retailers to join Streets and remove disposal BBQs from sale after fires across the National Park. 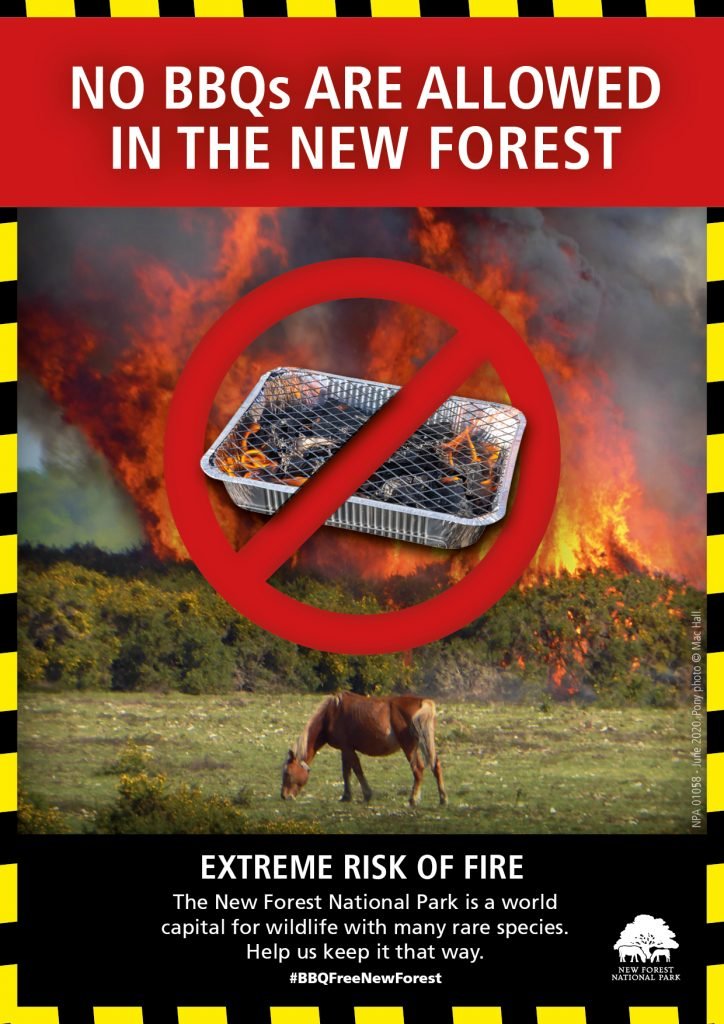