Breeding lapwings are widespread throughout the UK except Cornwall and Devon.

Traditionally a bird of mixed farmland, they still breed throughout Hampshire but in much smaller numbers than in the past. In the New Forest they breed both in the central open heaths and grassland (around 150 pairs) and in the surrounding farmland.

Lapwings like to nest on very open, almost bare ground that is close to grassland where they can take their chicks once they hatch. They need a patchwork of bare areas, grass and some damp ground or wetland edges where the chicks can find food.

Lapwings are very wary birds and will noisily complain at any potential predator anywhere near the nest. They will fly up and dive-bomb crows, foxes, dogs and even people, to drive them away from the nesting area. While they are doing this they leave the nest and hope that the camouflaged eggs or chicks are not found.

Lapwings have a swooping display flight that they perform over their breeding grounds together with weird electronic calls, almost like toys!

If you want to see lapwings, especially their displays, then the most reliable areas are the short grazed grasslands at the coast near Lymington and the best time of year is March to May. 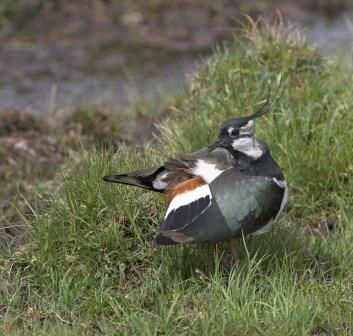 Lapwings flock together in winter and are easily seen on arable fields and along the coast at that time of year.

The lapwing is an unmistakable wader with a dark glossy green back, white underneath, black crest on the head and short beak. In flight they appear black and white with rounded ends to their wings.

How you can help

Lapwings will leave the nest to drive away predators and that includes you or your dog if you get too close. This makes the eggs vulnerable to chilling or being found by crows. It is therefore important to stay on footpaths and keep your dog close to you in spring.

BatsBats are fascinating animals, full of many mysteries still left...
BeetlesThere are a remarkable 2,600 kinds of beetles in the...
ButterfliesThe New Forest boasts an impressive array of uncommon and...
DeerFive species of deer found in the wild in the...
Dragonflies and damselfliesWith clean streams, more wet bogs than anywhere else in...
Heathland birdsWith some of the largest areas of heath in Europe,...
MothsThe New Forest has an estimated 1,460 kinds of moths,...
ReptilesThe New Forest National Park is home to all six...
Wading birdsThe New Forest is very important for wading birds during...