Adults are found in late May to the end of August in gardens, wooded parks and woodland, near decaying tree stumps (apple, elm, lime, beech and oak).

The New Forest is one of the strongholds for this species; with males often attracted to lights at night. Searching around lights in early morning in areas like Brockenhurst or Sway in June may result in the sight of several lying on, or walking on nearby pavements (some injured after collisions with motor vehicles).

Although looking rather fearsome, males are quite harmless; the females can, however, give quite a nip if handled. The size of the antlers appears to have little influence on mating success. Males fly to females after dusk, often in numbers, which may result in rarely observed fights between rival males. The antlers are used in these fights, with the winner throwing the loser onto the ground; several efforts may be made before a male has the right to mate with a female. Whilst fighting, they risk another male walking away with the prize.

The female lays eggs singly, near rotting wood and the life cycle takes three to four years, the larvae living in the stumps. The female may either die underground after laying its eggs, or around ground level. 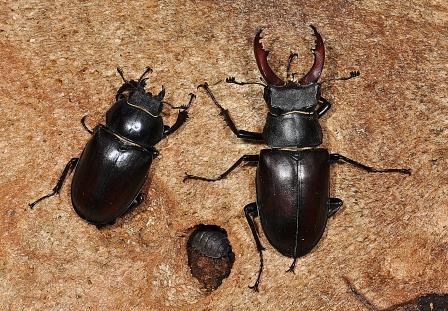 Noisy in flight, stag beetles are sometimes rather clumsy landing; if they land upside down or topple over, they struggle to right themselves. During the brief time in the adult stage (a few weeks), they are sometimes seen feeding on sap oozing from trees, for example from ‘Goat moth’ trees. These are live trees (often oaks) damaged by Goat moth larvae feeding inside; they have conspicuous exit holes and the sap from the tree attracts various insects.

In European folklore, the stag beetle was a symbol of evil and bad luck; medieval peasants believed they summoned thunderstorms.

Maintaining habitat for insects which are associated with deadwood is important. Leaving a stump in the garden might help Stag beetles find suitable habitat. They have a hard life, vehicles contribute to the death of these insects, as well as people accidentally treading on adults on the pavement; other predators include foxes and hedgehogs, also magpies, which eat the abdomen and leave the rest.

Find out more from the People’s Trust for Endangered Species where you can record this species via a link.

28-75 mm long (males larger), black; only the male has stag-like mandibles, which are reddish.

BatsTo some people they bring to mind vampires, Hallowe’en and...
BeetlesThere are a remarkable 2,600 kinds of beetles in the...
ButterfliesThe New Forest boasts an impressive array of uncommon and...
DeerFive species of deer found in the wild in the...
Dragonflies and damselfliesWith clean streams, more wet bogs than anywhere else in...
Heathland birdsWith some of the largest areas of heath in Europe,...
ReptilesThe New Forest National Park is home to all six...
Wading birdsThe New Forest is very important for wading birds during...