The flame-shouldered blister beetle sitaris muralis is an endangered species only known from one site in the New Forest (Brockenhurst village).

These beetles are parasites in the nest of the fairly common Hairy-footed Flower Bee Anthophora plumipes which nests in old brick walls. In spring these bees (females all black) can be seen hovering over garden flowers and are sometimes mistaken for bumblebees. Nests are often entered via what resembles ‘bullet holes’ drilled in the brick, often above head height 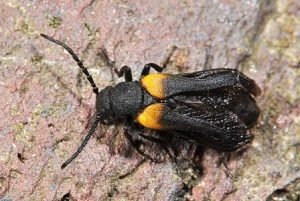 [see link for information on the bees].

What we know about the life-cycle of these beetles is mainly gleaned from Fabre (1857):

“The eggs are laid near the ground nests of the bees during late summer and hatch in the fall. The larvae hibernate and become active the following spring, climb the plants to the flowers, and await the visits of the female host bees to which they attach themselves to be carried to the nests being constructed by the bees in the soil. Upon arrival there the triungulins leave the adult bees to seek out their eggs, which are consumed and which enable the predators to transform into apodous eruciform larvae. These latter consume the stored honey, which enables them to develop fully and to transform into prepupae which hibernate the second winter. The following spring pupation takes place and the adult beetles emerge in the summer of the second year preparatory to mating and laying their eggs as indicated above” 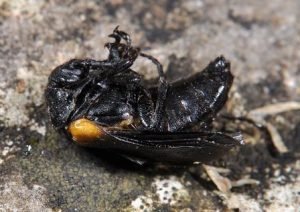 Look for the beetles resting on any old brick walls in late July or throughout August, or they might be on the pavement nearby; they are poor fliers and clumsy when walking. In defense, they curl up in a ball and play dead; it is likely that the bright orange on the wing cases is a warning colour.

If you find one, please photograph it, if possible, and report it to Buglife.

The orange 'shoulders' of this 8-14 mm long species, are unmistakable.

BatsTo some people they bring to mind vampires, Hallowe’en and...
BeetlesThere are a remarkable 2,600 kinds of beetles in the...
ButterfliesThe New Forest boasts an impressive array of uncommon and...
DeerFive species of deer found in the wild in the...
Dragonflies and damselfliesWith clean streams, more wet bogs than anywhere else in...
Heathland birdsWith some of the largest areas of heath in Europe,...
ReptilesThe New Forest National Park is home to all six...
Wading birdsThe New Forest is very important for wading birds during...