One of the New Forest’s most celebrated residents in the 19th century, Mary Elizabeth Braddon (1837 -1915) was a prolific writer and the founder of a new school of ‘sensational’ fiction. She and her husband, the publisher John Maxwell, had a country home at Bank, near Lyndhurst.

Writing as M.E.Braddon, the one-time actress produced at least 80 novels as well as essays, plays, poems and short stories. Her most famous work was Lady Audley’s Secret (1862), which made her rich and famous.

She and her husband commissioned construction of their New Forest country house, named Annesley, in the early 1880s. The family visited regularly from their main family home in Richmond and their holidays were usually announced in the local newspaper.

Miss Braddon also appeared on postcards and photographs of Bank published at the time, and her home featured in sight-seeing charabanc tours of the New Forest.

The couple were active and popular members of the community and provided public reading rooms at Bank and nearby Emery Down. The facility at Emery Down became a school annexe and was later demolished, while the reading room at Bank was used as a school and was then incorporated into a new development.

After John Maxwell’s death in 1895 his widow rarely visited the Forest. Annesley became a children’s home in the 1940s and was then converted into apartments. 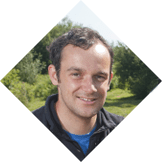