As the winter season approaches and autumn draws to a close, you begin to notice the Forest emptying with a decrease of visitors after a late summer flurry of staycations due to the pandemic’s foreign travel restrictions. The autumnal colours have developed slightly later with warmer weather and fewer frosts, yet with higher rainfall than average, Forest streams and rivers have flooded – affecting many areas. 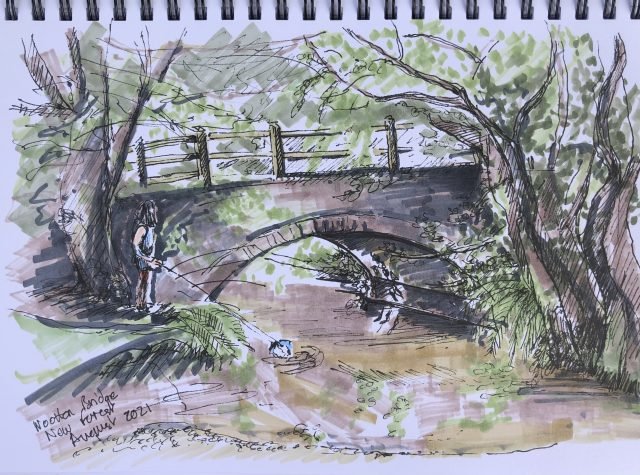 In my new role for the New Forest National Park Authority and New Forest District Council for Open Water Access, I have quite a wide remit both geographically and within the community. The New Forest is home to many types of water courses including short New Forest streams, ponds, lagoons, and estuaries with salt marshes. It is a complicated and intricate maze of liquids. The water in itself is diverse and varied, I was aware of this, but now with more astute observation it is clear to see the diversity of aquatic habitats we have in such a small area. Some of our waterways are in the envious position of being some of the best in the UK supporting such rich biodiversity, it makes the mind boggle. We have jewels on our doorstep and most of us are unaware of these.

Water is one of the most ‘generous’ of elements, in that it shares its riches readily. Water is extremely volatile. It cannot be contained easily. It will always find its own route, its ‘watercourse’ as if it were pre-determined. Most waterways are intent on getting to the sea.

In 2003 I was working on a project on the River Lavant (a winterbourne) that flows through Chichester. In 2000 the river had violently flooded the city centre and proposals were sought from engineers to come up with a solution to prevent this historic city centre being deluged again. The winning design from Dutch Architects proposed that during periods of peak rainfall the river should be diverted across the flood plains due South. This in fact was the River Lavant’s original watercourse and was diverted by the Romans to feed water into their city! Since then, the new bypass had been constructed and further created obstacles for the flood water reaching the sea. It showed that watercourses ultimately will find their own way making short work of our efforts to contain, divert or withhold it. What goes up must come down! Water will carve out its own route.

Fresh water in the New Forest, as it weaves its way to the coast, changes from fresh water to saline. Part way it is neither fresh nor salt water, it is brackish. Even within this salinity, its saltiness varies. Each of these different ‘cocktails’ supports its own menagerie of wildlife. In addition to the saltwater, fresh water, and brackish water the menu increases and diversifies further. When I swim in open water, I can also feel the subtle differences in the texture of the water. It sounds incredulous but sometimes the water feels silken, sometimes heavy, sometimes sticky.

Water dissolves, creates solutions, so depending on what she weaves through or ponders on she will transform. Slow journeys and passages of still water will have greater time to absorb and alter. As this has been happening for millennia, wildlife has already selected their favourite, most hospitable aquatic habitat as home. As the land abuts the sea on our stretch of coast there is an area of gravel substrate that travels quite far in land. In contrast to clay, which is great at creating an impenetrable barrier, gravel effortlessly allows fluids to percolate and filter. Brackish water can be found inland!

We humans have come late to the party, but as is our inept way, our habits are dramatically and, in some cases, irreversibly changing these watery abodes. Our respect for water has been woeful. We use streams and rivers as sewers to conjure our waste away. We extract what we want for ‘our’ needs. Water levels plummet as extraction seems to keep drawing for an endless insatiable thirst. In the past we have diverted watercourses to power engines, fill dams, permanently damaging ecosystems. Our husbandry of the land includes fertilising soils to increase yields, in so doing over feeding and choking our rivers, literally squeezing the oxygen out of them. These and other problems are being addressed by organisations such as New Forest Land Advice Service and Freshwater Habitats Trust liaising with landowners who are working hard to improve their waterways. Our new relationship with the natural world gained during the lockdowns, demands us to pay attention not to drift back to our old ways but create new habits that will put our watery eco systems front and foremost.