A new stronghold for the nightjar and other wildlife has been established in the north of the New Forest thanks to the total transformation of a commercial tree plantation.

A diverse landscape of rare lowland heathland, woodland and wetland has been created at Foxbury, a 350-acre site acquired by the National Trust.

Foxbury is the largest project in the New Forest National Park Authority’s £4.4m landscape partnership scheme Our Past, Our Future, which is backed by the National Lottery Heritage Fund.

Restoration work has included removing invasive species such as pine and rhododendron – allowing native trees, wildflowers and shrubs to re-establish – as well as planting 18,000 trees with the help of volunteers.

The result has been a huge increase in wildlife from birds to butterflies.

Jacob White, the National Trust’s area ranger, said: ‘Foxbury now has one of the densest nightjar populations in the New Forest with 27 churring males identified in recent surveys. Breeding Dartford warbler and woodlark have also been noted.

‘In 2006 when Foxbury was still a plantation, the bird surveys consistently found around 12 species of bird on the site. Now, 106 species of bird have been identified at Foxbury.’

Further studies have identified 26 species of butterfly, including heathland specialist the silver-studded blue, 12 species of bat and over 17 species of dragonfly and damselfly.

A third of Foxbury is now woodland; trees planted include oak, alder, and sweet chestnut, as well as blackthorn, hawthorn, crab apple and wild cherry.

A herd of belted Galloway cattle and six New Forest ponies graze the land to keep the grasses and invasive plant saplings at bay. 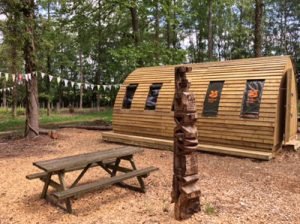 The site is now open to the public for a range of special events such as wild play days and ranger-led walks.

Jacob said: ‘Foxbury is a huge success story for the National Park, not just through the regeneration of rare habitats and colonisation of wildlife, but also through its ability to involve members of the community from all walks of life through education, learning and volunteering.

‘With such an undertaking of habitat restoration, we knew local community involvement was fundamental for long-term success. So far over 400 people have helped us plant 18,000 trees, survey for wildlife and maintain the heathland, clocking up over 1,600 volunteer days.

‘Now we are able to offer the sweeping landscapes, rare wildlife spots and secluded woodlands of the New Forest within a private and easily accessible site.’

Foxbury has benefitted from funding from the five-year Our Past, Our Future Landscape Partnership Scheme. The scheme has also seen a car park installed and a basecamp created featuring three timber cabins, benches, a den building area, bug hotels and a mud kitchen.

Nightjars are very hawk-like in flight with long, pointed wings and a long tail. Males have a white spot on each wing that can sometimes be seen, but the shape and song along with their nocturnal activity make them unmistakable.

The New Forest is important for these unusual birds and is designated as a Special Protection Area in part because of the breeding populations of this species.

Found in areas of heath and young woodland, Nightjars are an enigmatic bird and people will not forget seeing, or hearing, one.

They are only active at night as they feed on moths and other insects caught on the wing. They also sing at night – an eerie but beautiful churring sound, given from a prominent perch in a tree on the heath.

They have a silent floating flight, but the males will clap their wings together in a display to attract females. They are summer visitors (from Africa) and you will only see them between May and August.

Being nocturnal, they rest during the day. They also nest on the ground and so are superbly camouflaged with mottled browns and greys that are almost impossible to see against the background of bracken, heather and gravels.

Ground nesting birds can easily be frightened away from their nests in spring, leaving eggs or young vulnerable to the cold, or to predators such as crows.

To help them rear their young safely, please keep yourself, dogs and ridden horses on the main tracks from the beginning of March to the end of July.

Listen to an audio clip of a nightjar churring below:

The lowland heathland of the New Forest is very special because of the warm, dry climate and the fact that it is on sandy soil. These conditions favour many species and create a different type of heath to the moors of northern England, Scotland and Wales.

Worldwide, lowland heath is mainly found in north-west Europe, with the majority in the UK, Denmark and Holland. The UK has lost over 80% of its lowland heath since 1800, and now has about 20% of the world’s lowland heath, making it a very rare habitat.

Relatively few species of plant can tolerate the acid conditions of the sandy soils. In order for these special plants to thrive, trees and scrub need to be prevented from spreading or be pushed back. This work is best done by grazing animals that like to eat the shoots and leaves of young trees.

To find out when Foxbury is open and what’s on offer, visit www.nationaltrust.org.uk/foxbury

Our Past, Our Future

Our Past, Our Future is a Landscape Partnership Scheme for the New Forest which, supported by the National Lottery Heritage Fund, is undertaking a range of projects to restore lost habitats, develop Forest skills and inspire a new generation to champion and care for the New Forest. The partnership focuses on the enclosed lands which surround the Open Forest.

The five-year scheme includes 21 projects and is being led by the New Forest National Park Authority working with several delivery and funding partners.

For more information about the Our Past, Our Future scheme, visit www.newforestnpa.gov.uk/landscapepartnership