This historic trail has two routes, one of which is more accessible. The main route is longer and includes a southern section with unsurfaced rights of way with some gates and stiles. The shorter route is on surfaced tracks and is more accessible for those with reduced mobility and mobility scooters.

This map shows the shorter route.

Rockford Common is an area of open heathland and woodland, grazed by livestock belonging to local commoners. The area is rich in wildlife and has been designated a Site of Special Scientific Interest (SSSI). Unlike much of the other New Forest moorland, Rockford Common once belonged to estates; originally Moyles Court and then Somerley. The family of Lord Normanton of Somerley bought both estates in 1825. The National Trust bought about 1500 acres of common land at Ibsley and Rockford in 1999 and a further 32 acres in 2007. 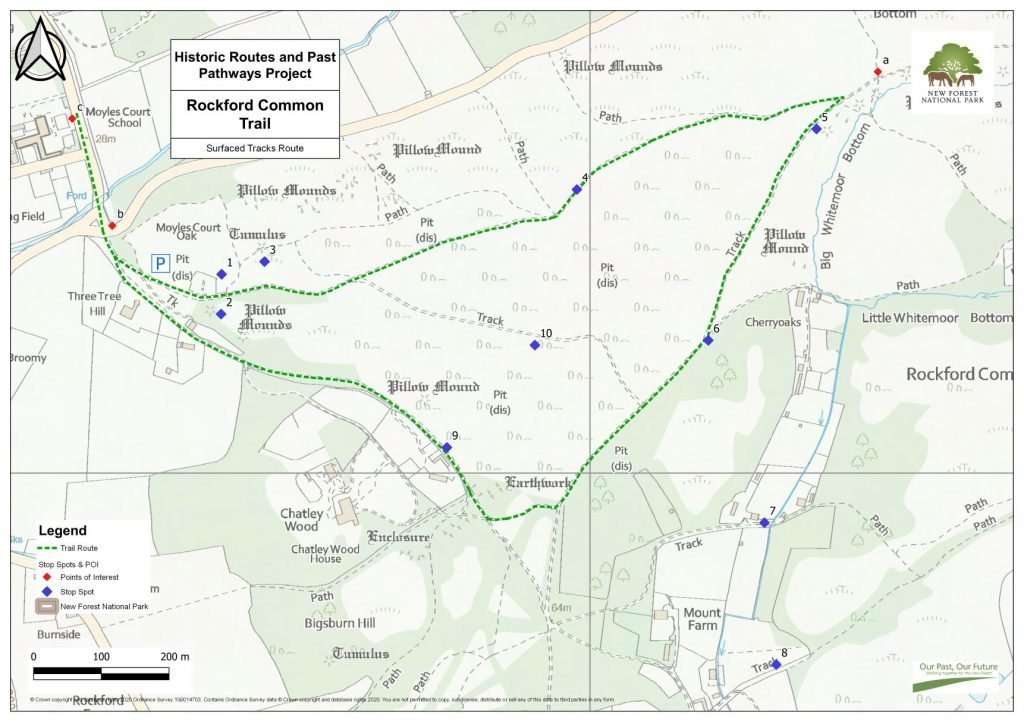 In the 1950s, sand was extracted from this enormous pit by the cart load by Bert Shutler. Richard Deacon, a local Commoner, remembers watching the Ruston Bucyrus front shovel excavator at work in his childhood. There is a Scheduled Ancient Monument above the sand pit and ongoing erosion of the sand is putting this monument at risk, so please do not access the pit.

A pillow mound and a bee garden are visible on this route but tricky to spot and may be covered in vegetation. Pillow mounds were used for keeping rabbits during the Medieval period. Rabbit was a rare commodity during those times, prized for their fur and meat. The mounds were long, low, flat-topped earthworks and clusters are spread over the south and west facing slopes of the Common.

Bee gardens are areas enclosed by a low earthen bank and would have had a low fence on the back to prevent livestock getting in and disturbing the straw bee skeps – an early form of beehive that looked like a witch’s hat. Bee skeps were located across the Common and wider New Forest to harvest honey from heather.

The New Forest is known to have been particularly important for lowland Bronze Age occupation and a considerable amount of archaeological evidence has survived in this area. This is the site of a Bronze Age (2100 to 750BC) bowl barrow – an earthen mound which covers a single burial. Later in the Bronze Age and into the Iron Age (750BC to AD43) it was common practice to place additional burials in and around these barrows in the form of large, upturned pottery urns containing cremated remains.

The construction of RAF Ibsley during WW2 had an enormous impact on this area. The airfield, which operated from 1941 to 1946, was located to the north west of the Common, where you can now see the lakes. The Common was used for military manoeuvres, with slit trenches and gun emplacements.
The site of the old airfield is now a series of gravel pits and landscaped lakes and only the control tower and a short section of runway remain.

Mineral extraction has caused dramatic changes to this landscape – up to six metres depth of gravel was stripped from most of the western end of the Common.

Big Whitemore Bottom features examples of pillow mounds, which, as described above, were used for keeping rabbits during the Medieval period.

The wildlife across the lowland heathland of Rockford is a stunning mix of flora and fauna, constantly changing through the seasons. The beautiful purple of the heather is best viewed in late August, and throughout the summer the common is home to ground nesting birds, such as woodlark, nightjar, Dartford warbler and lapwing. Rare silver studded blue butterflies can be seen flying low over the heather in July and adders are a common sight, basking under gorse bushes in the morning sunshine.
Dartford warblers rely on the well managed gorse stands throughout the year, for breeding in the spring and shelter during the winter. Hen harriers and merlin can be seen hunting across the plateaux in winter, as well as peregrine falcons and migrant great grey shrikes.

Silver birch, a native tree, supports well over 300 insect species; a fact that makes these trees a favoured foraging place for woodpeckers which often make nesting holes in the trunk. Birch seeds also provide winter food for siskins, greenfinches and redpolls. In addition, the little catkins in spring, are an early source of pollen.

In the fields here you can often find Gloucester Old Spot pigs. The New Forest is one of the few places in the UK where pannage is still carried out. This practice probably dates back to the time of William the Conqueror, who established the New Forest as a Royal hunting ground around 1079AD. Each autumn, domestic pigs are allowed out on the Forest to eat acorns, which are poisonous to New Forest ponies and cattle. Up to 600 pigs are currently released, but in the 19th century there were as many as 6,000! The pigs are owned by the commoners and the main breeds are Tamworth, Gloucester Old Spot, British Saddleback and Wessex Saddleback. Pannage lasts for at least 60 days, from late September or whenever the acorns start to drop.

As you walk the most southerly section of the trail to the east of Mount Farm, the route becomes a well-worn hollow way, which may indicate that this is an ancient trackway. After centuries of use these types of old routes often became eroded or sunken in the middle, leading to sunken routes with high banks. This route is visible on Taylor’s Hampshire map, dated 1759, but is likely to be much older. In 1786 a Turnpike was created from Cadnam to Ringwood and on to Longham, now the A31. Following this it is possible that this ancient route was used as a bypass to avoid the tollgate at Picket Post.

On the 1945 site plans for RAF Ibsley this location is marked as a gun site and Chatley Wood house and grounds as officer accommodation.

For the BBC’s WW2 People’s War project, Gwennie Matilda Howard gave her memories of the area. Gwennie recalled that during WW2 there was a large gun at the top of Chatley Hill, ‘ack-ack’ guns on the Common itself and bombs stored in the gravel pit nearby. Read the account on the BBC website.

What is now a peaceful haven for nature was once a busy settlement and, later, illegal farmland. Prior to gravel extraction in the late 1960s remains of a Bronze Age settlement were found during topsoil removal. Over 180 features were recorded including burials, pits, post holes, hearths and gullies. In more recent times, studies of historic aerial photography have revealed ridge and furrow cultivation and lines of pillow mounds, evidence of late and post Medieval encroachment – agricultural expansion illegally cutting into the Forest boundaries.

The site of Moyles Court has been occupied since the Middle Ages but the current red brick manor house dates from the 17th century. From 1658 it became the manor house of the Lisle family (whose name is derived from the Isle of Wight).

It is famous for events in 1685 when Moyles Court was the home of Dame Alice Lisle, who by this time was over 70 years old. Two members of the rebel army fighting James II, John Hickes and Richard Nelthorpe, sought refuge here and Alice Lisle consented. They were arrested by the King’s men the next day. It is quite possible that Alice Lisle thought they were just religious dissenters rather than traitors. A jury found her innocent of treason three times, but she was eventually sentenced and beheaded in Winchester marketplace for ‘harbouring persons disaffected to the King’. Moyes Court was initially confiscated by the Crown but was eventually restored to the Lisle family in 1688. Alice Lisle is buried in nearby Ellingham Church.

The property remained in the Lisle family until around 1820. By this time, it was dilapidated and unoccupied and it was sold to Lord Normanton of neighbouring Somerley. It continued as a country residence until it was vacated immediately before WWII.

Moyles Court was requisitioned by the RAF in 1940 and became the station headquarters of Ibsley Airfield. It was used as accommodation for officers. The house was eventually derequisitioned in 1946 and since then Moyles Court has been an independent school.

Just to the west of Moyles Court along Highwood Lane is the Alice Lisle pub, where you can take post-trail refreshment. This building was originally Rockford village school and its current name reflects the local connection with Alice Lisle.

Accessible walks (miles without stiles)We’re working hard to remove the barriers, both mental and...
Dog walkingDog walking is very popular in the New Forest National...
Historic routesThese walking routes have an abundance of historic features and...
Walking routesWalking is a wonderful way to experience the tranquillity of...