Roles ranged from helping at Hythe Pier to Highcliffe Castle, working with badgers to butterflies, plus practical opportunities within a host of natural habitats.

A record-breaking 760 visitors attended the annual Fair, which is now in its 10th year, to browse almost 60 organisations searching for volunteers.

The National Trust, Forestry England and RSPB exhibited at the event on 26 January, alongside local groups including Rockbourne Roman Villa, Pondhead Conservation Trust and Friends of the New Forest.

People could sign up to do gardening at Exbury, go bike riding with PEDALL Inclusive Cycling or help crew the Steamship Shieldhall. 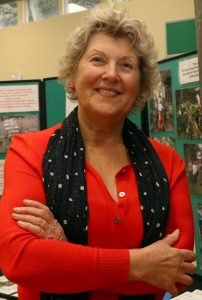 The Fair was officially opened by Patsy Baverstock, from Southampton, who has been a volunteer since visiting the Fair four years ago. Since signing up to the New Forest Non-Native Plants project, she has spent more than 700 hours helping pull invasive Himalayan balsam from the Forest’s riverbanks.

Patsy (pictured left) said: ‘Each year I volunteer, I have found that I love it more and more, hence the amount of hours I’ve done! I’ve discovered the elephant hawk moth, which was really amazing to see, and another time we were sat having a coffee and suddenly three stags walked in front of us. Where else are you going to see this? You hear so much about mental health and I’m here experiencing everything they say you should do; it’s wonderful.’

She added: ‘Get out there and volunteer, there’s loads to do and it’s really worthwhile.’

Held at Lyndhurst Community Centre, the Fair is an annual event organised by the New Forest National Park Authority and is free to attend for both organisations and visitors. In the 10 years it has been running, the event has more than doubled in size and attracts potential volunteers from across the Forest and beyond.

Oliver Crosthwaite-Eyre, Chairman of the New Forest National Park Authority, said: ‘Our records show that since the Fair began, over 4,000 people have come here looking for opportunities to volunteer. There is an enormous array of opportunities; you can volunteer to work in a castle, you can volunteer to work on a steamship. You can work with a search and rescue team or you can work with archaeologists.  It’s an incredible opportunity, a one-stop-shop for people to come to.’

If you were unable to attend the event, all the exhibitors can be found on the NFNPA website at www.newforestnpa.gov.uk/volunteering.

Next year’s event is planned for Sunday January 31, 2021. To keep up to date with news about the Fair and the National Park, sign up to the National Park email newsletter at www.newforestnpa.gov.uk.

The New Forest National Park Authority’s statutory purposes are to:

-Conserve and enhance the natural beauty, wildlife and cultural heritage of the Park – Protect.

-Promote opportunities for understanding and enjoyment of its special qualities – Enjoy.

We also have a duty to:
Seek to foster the social and economic well-being of local communities within the Park – Prosper.

The New Forest National Park was designated in March 2005. Its unique landscape has been shaped over the centuries by grazing ponies, cattle and pigs which roam free. Majestic woodlands, rare heathland and a spectacular coastline provide fabulous opportunities for quiet recreation, enjoyment and discovery.

Visit www.newforestnpa.gov.uk to find out more.

England’s largest agri-environment scheme has been extended for...