To celebrate the 10th year of the New Forest National Park Volunteer Fair we would like to introduce you to 10 of our terrific volunteers, all of whom have given an incredible 100 or more hours of their time to Forest causes. 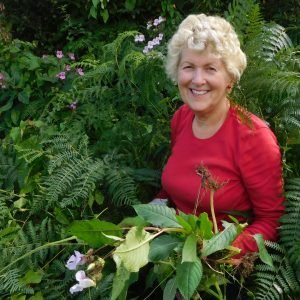 Patsy Baverstock from Southampton has volunteered more than 700 hours on the New Forest Non-Native Plants project.

Hampshire & Isle of Wight Wildlife Trust is working with landowners to reduce the damage caused to the natural heritage of the New Forest by invasive non-native species. Read more about Non-Native Plants.

Patsy said: ‘I have thoroughly enjoyed being part of the team helping to remove Himalayan balsam from our local areas. It is amazing to see the difference that it has made to our woods, now that our native flowers such as bluebells and stitchwort have reappeared. Returning each year to the same sites, they are almost unrecognisable, which shows what a huge difference our efforts have made. The work has been very satisfying and enjoyable.’ 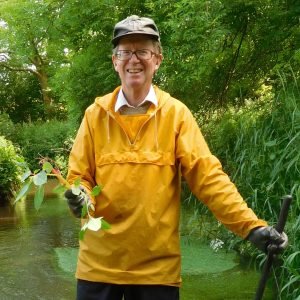 Brian Matthews from Lymington has volunteered an incredible 1,200 hours on a range of New Forest projects including Nature’s Stepping Stones.

Nature’s Stepping Stones is led by the New Forest Land Advice Service. It offers advice and help to owners and managers of grassland, heathland, coastal and wetland Sites of Importance for Nature Conservation (SINCs) to ensure they are managed in the best way for wildlife. Read more about Nature’s Stepping Stones.

Brian said: ‘I was already a Hampshire & Isle of Wight Wildlife Trust volunteer when the Our Past, Our Future Landscape Partnership Scheme was launched in 2015 and so have been involved in the project from the outset. Whilst majoring on the Non-Native Plants project, I subsequently volunteered for other projects, including Nature’s Stepping Stones and Better Boundaries. I have undertaken a beach clean and litter surveys, a shore search, a bioblitz, water quality testing and other conservation tasks. As well as addressing my environmental concerns, an additional personal benefit is that I have had tinnitus for many years and find that working outdoors is very therapeutic.’ 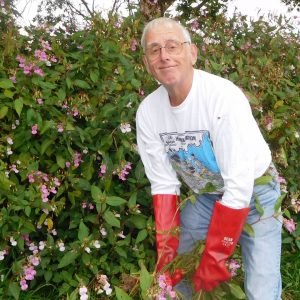 Roger Bradley from Southampton has volunteered more than 200 hours at Foxbury and on archaeology and non-native plants projects.

Foxbury is a 150-hectare heathland restoration site owned by the National Trust, in the north of the New Forest, near East Wellow. The site was a commercial conifer plantation, but the National Trust is slowly restoring it to its 19th Century lowland heathland and mixed deciduous woodland habitat. Read more about Foxbury.

Roger said: ‘For me it is about learning, fresh air, exercise and making lots of new friends – some of which are a bit younger, so they help to keep me young!’ 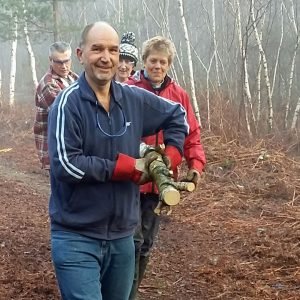 Ian Searle from Bransgore has volunteered more than 100 hours on projects including Better Boundaries, Nature’s Stepping Stones and Working Woodlands.

Run by the New Forest Land Advice Service, Better Boundaries works with landowners to restore, enhance and create boundary features such as hedges to improve and produce wildlife corridors. Read about Better Boundaries.

Ian said: ‘As someone who has enjoyed many hours wandering the New Forest, volunteering for NFNPA seemed an obvious choice. It has been most rewarding – where else could you get a good workout, enjoy fresh air and meet like-minded people with a passion for nature? I’ve worked in all weathers, in all environments, and with an interesting mixture of people. I’ve gained huge pleasure in seeing the difference a few energetic bods can make to some fairly unruly landscapes.’ 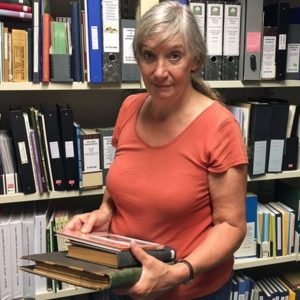 Sylvia Crocker from Woodlands has volunteered more than 800 hours on a range of projects including Ecademy, Heritage on my Doorstep and Historic Routes.

Sylvia said: ‘I am a volunteer in the Christopher Tower Reference Library in Lyndhurst and I have been helping with the New Forest Knowledge website since it was started. The library has a unique and fascinating collection of books, maps, photos and postcards relating to the New Forest and it is a really interesting place to work. The website and the whole project called Our Past, Our Future has made many more people aware of the history and heritage of the New Forest, and hopefully will help to preserve it for the future.’ 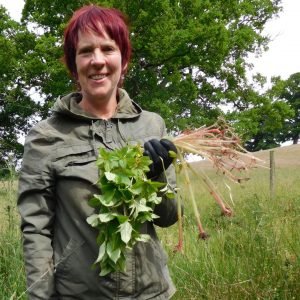 Chrissie Whiffen from Southampton has volunteered more than 100 hours on the New Forest Non-Native Plants project.

Chrissie said: ‘Ridding an area of Himalayan balsam is so fulfilling. It is good for the soul and it is great for our native plants and wildlife as it opens up areas previously overrun with balsam. Pulling up two-metre-high plants is easy; the roots are two inches deep.’ 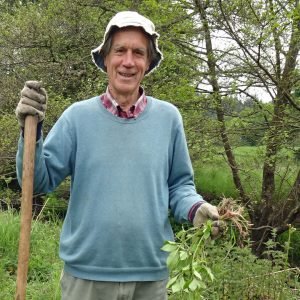 John said: ‘I enjoy visiting places not normally accessible to the public, where there are often interesting wild plants, birds and invertebrates. I’ve explored stretches of the Cadnam River, sometimes both banks, before it loses its individual identity in the Blackwater. I also enjoy the company and camaraderie of like-minded people and the satisfaction of knowing that our individual efforts in pulling Himalayan balsam are all contributing to a worthwhile common purpose. I can now appreciate the value of, and have learned how best to use, a stout stick as a ‘third leg’ and as a useful tool for certain aspects of the job!’ 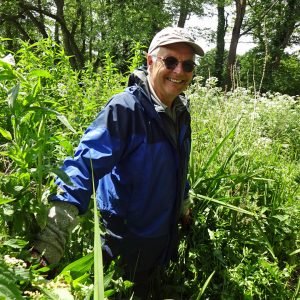 Peter Hancock from Bishopstoke has volunteered more than 100 hours on the New Forest Non-Native Plants project.

Peter said: ‘Being a volunteer is very satisfying. We get out in the open air, meet like-minded people and help improve the local environment. Over time the level of camaraderie has grown and it is a real pleasure to work with the other volunteers and staff from the local trusts. We have seen the marked impact we have made to improving the environment. With the removal of invasive Himalayan balsam, our collective efforts are making a real difference.’ 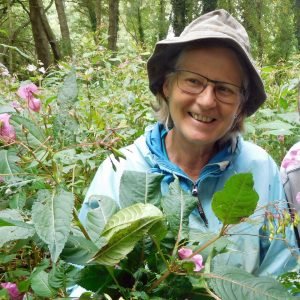 She said: ‘I love balsam picking, from the tiny inches-high seedlings to the two metre plants at the end of the summer. The idea is to get rid of them so, after several years of picking Himalayan balsam, it is so rewarding to return to areas that were just covered in it to find bluebells, stitchwort and foxgloves flowering in its place. With all the talk about mental health and keeping active, balsam picking covers both bases as well as helping our environment. Being out in the countryside, in the fresh air, clambering over tree trunks, crawling under brambles; who needs the gym? And we get rid of the balsam!’ 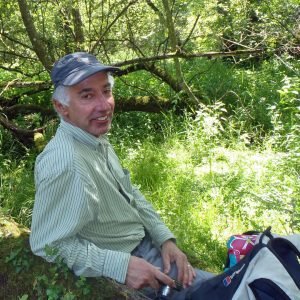 Anthony said: ‘It’s great to wallow in mud with a lovely bunch of folk and know that having fun makes such an important difference. As a result of our efforts last year, the riverbank looks like a riverbank again.’

Would you like to join the New Forest’s volunteer community?

More than 50 local organisations will feature at our 2020 Volunteer Fair which takes place on Sunday, January 26. Entry is free and you’ll be able to hear talks about volunteering in the New Forest as well as browse organisations in a relaxed atmosphere. Come along to Lyndhurst Community Centre, just off the High Street, in Lyndhurst SO43 7NY, between 10.30am and 4pm.

See the full list of organisations exhibiting and the schedule of talks here.